Skip to content
The term “starving student” gets thrown around rather carelessly.  This colloquialism refers to the mounds of money required by post-secondary students to pay for tuition, books, and housing, in many cases leaving little left over for food or entertainment (Heaven forbid).
Sure, certain students in university or college have access to government assistance (OSAP), scholarships, bursaries, and other loans/grants; however, for those who don’t qualify—sometimes for a ridiculous reason as their parents’ income registered as “too high”, even when a student chooses to or must pay his or her own way—many sacrifice their health and end up on a diet of ramen and Kraft Dinner.  While fine in moderation, these pre-packaged foods hardly give the required nutrients to sustain a learning mind and a weary body.  Some say a part-time job solves the income issue, but time between lectures, projects, and studying often does not present itself, not to mention the difficulty of finding a job while the city sits at 7.5% unemployment rate (as of November).
What options do these lower-income students have?  Some will establish a food budget and consume enough to keep energized.  Some may just go hungry and get by one one meal a day.  Others make the trip to the south end of London and make use of the services provided by the London Food Bank. 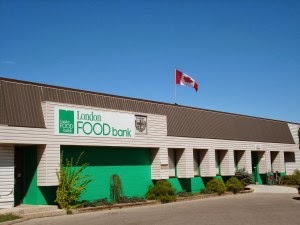 In the late 1990s, the University of Western Ontario and the London Food Bank discussed how to address students in need.  The idea of having a food bank on campus didn’t proceed for fear of hungry students feeling ashamed to be seen by their colleagues using such a service.  Instead, the Food Bank opened its doors on Saturdays for two hours dedicated to serve students.  The Food Bank’s location far enough away from campus (on King Street beside Kellogg’s at the time and now on Leathorne Street) allowed the anonymity that students likely would not get on campus.

In my years of volunteering on Saturday mornings (since 1999), the demand for student support has grown alarmingly.  We see students from Fanshawe College, Western University, multiple private colleges, and newer Canadians enrolled in courses for English as a second language.  Some of them have insufficient funds from OSAP, some have part-time jobs, some have children, but the vast majority are single and have no income.  In a food bank that sees approximately 3600 families (of all sizes from one person and up) visit per month, we occasionally serve 20+ students on a Saturday morning, many of them repeat clients.  While that doesn’t sound like many people, we used to only have two to five at most from 2004 until around mid-2011.  Many more make the trek during the weekday public hours for their emergency hamper that lasts four to five days.

We need a better loan program in this province, one that takes into account students supporting themselves through school, and also factors in the exorbitant price of books and rent, while allowing for a healthy, solid diet to fit into their budget.

The next time you hear someone say “starving student”, or find yourself about to use the phrase, think about the gravity of the words:  the students truly starving may not take it lightly.